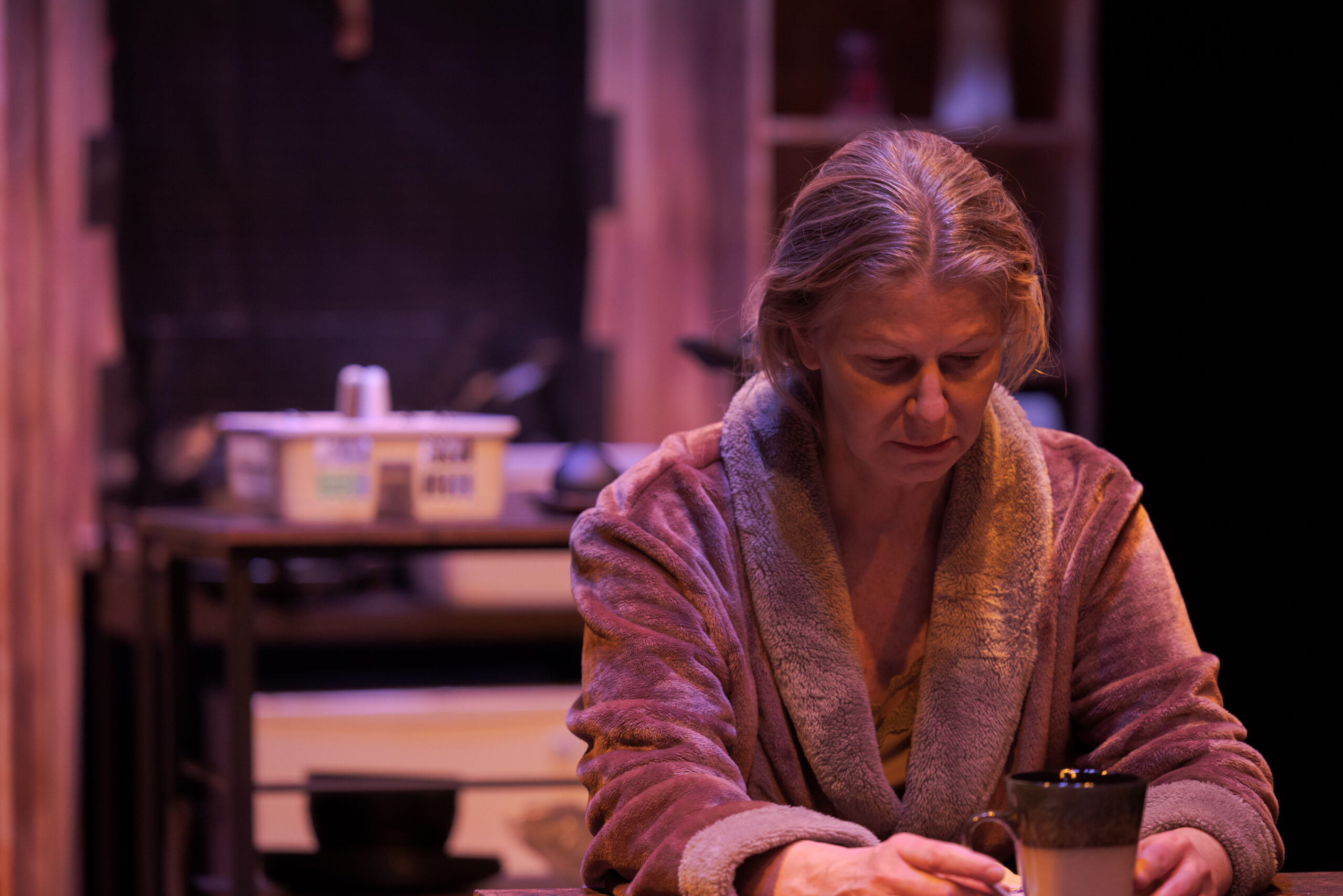 “The compelling rhythms of the naturalistic dialogue find powerful expression in the wrenching, tender, lived-in performances by both Beato and Steuer. This Bloom will take deep root in your memory.”

“Monica Steuer’s Julia dominates the play. Strong and loving, a mother lost in politics and schooled in hate, she is a remarkable actress and she broke my heart…”

“Steuer maintains the driving energy of a mad woman. We are dragged skillfully through her many realities… At a time in our own history, where some state laws are threatening both the dignity and the livelihoods of their residents based upon sexual orientation, this drama is both frightening and timely.”

“Stellar acting by Monica Steuer…”
“I was gobsmacked by this amazing, intimate, intense, deeply moving drama. The acting, writing, directing…You don’t even get this caliber of work on Broadway very much these days!”
“This is a hidden gem in the theater scene right now. Masterfully acted. Not to be missed!” 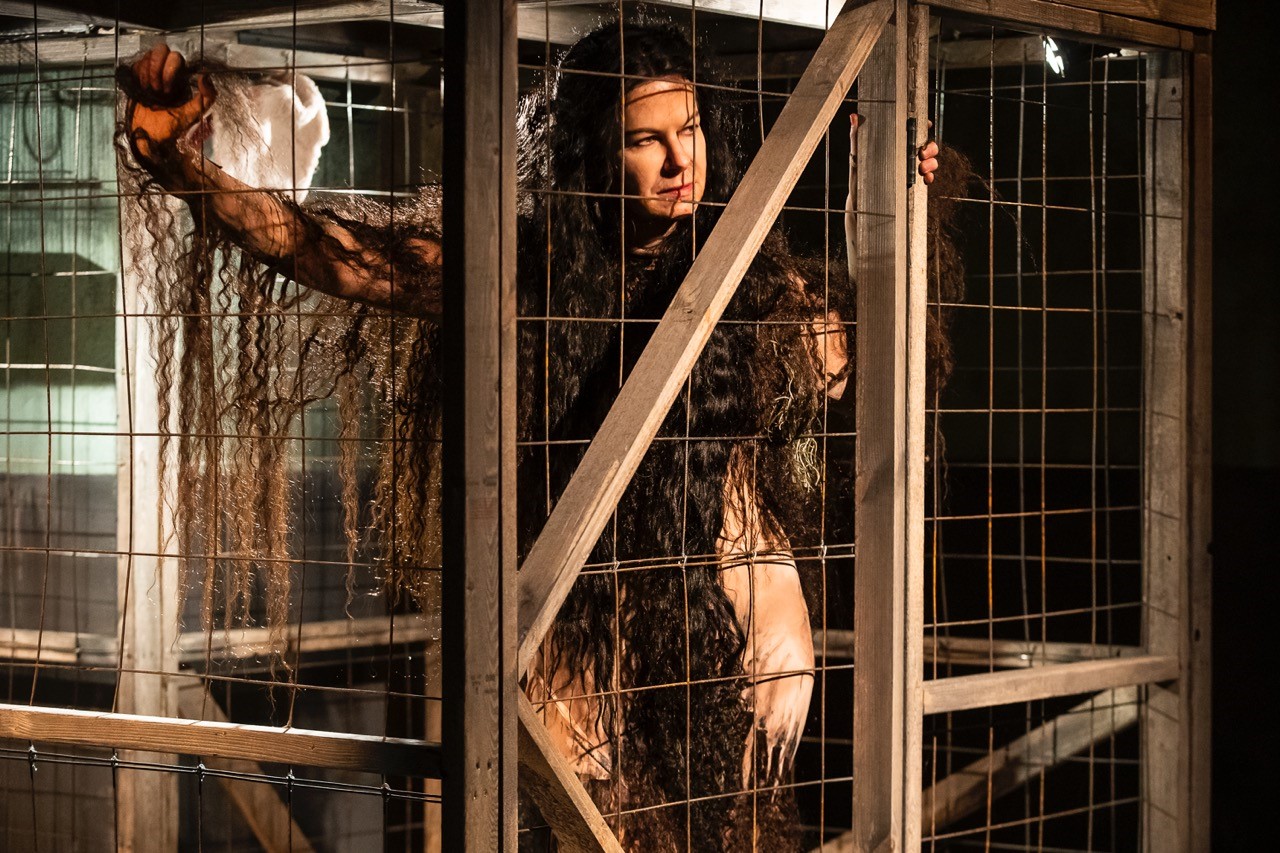 “Steuer’s fine performance is reason enough to see the show. She makes Citrona a bundle of contrasting behaviors: timidity, defensive aggression, unbridled libidinousness. Tall and apparently strong, she nevertheless makes the character seem stressed and unhealthy.  Steuer snarls some of her character’s lines with sarcastic fury and touches of humor. When Citrona contemplates her seduction of Nena, there’s a hint of self-deprecation in Steuer’s voice as she deadpans, “It’s times like this I wish I knew some Marvin Gaye songs.” Such glints of campiness alleviate the disquieting aspects of the play somewhat. Those who go see Fur are not likely to soon forget the production or its unusual central character.”

“The bright spot of this production is STEUER, who brings unexpected sass and verve to even the most nonsensical dialogue.” 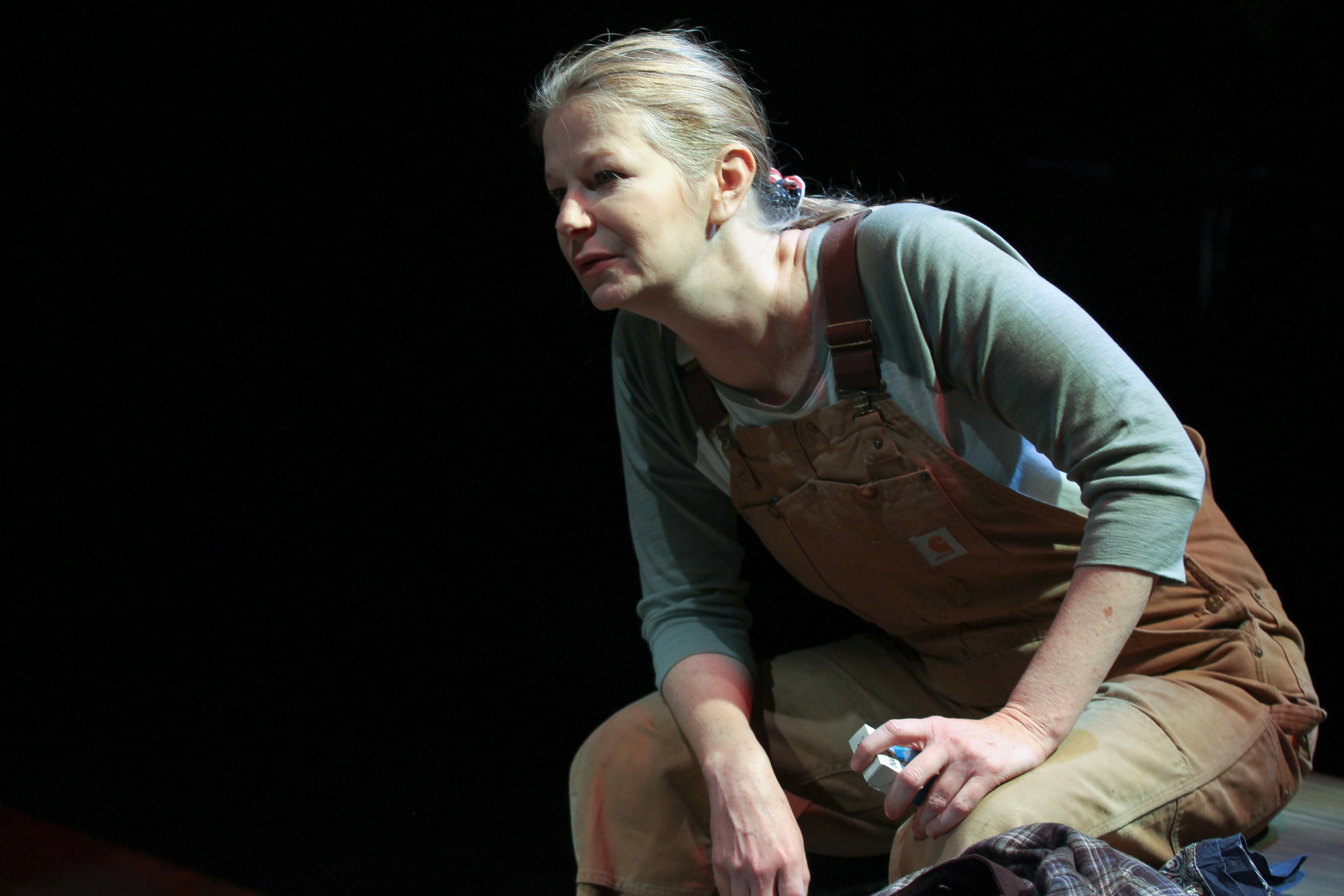 “Monica Steuer gives an explosive performance as Tracey. Steuer plays this character with intense force as she goes from a fiercely independent person to someone who is shattered after losing her job. Some of the best portions of the play are the explosive battles between Tracey and Cynthia. Steuer and Strum are brilliant in these scenes, but they are heart-wrenching to watch. Sweat is a brilliant, uncompromising and ultimately heartbreaking play performed by a group of incredible actors who give luminous performances.”

“Steuer is all bluster and bravado as Tracey, but once in a while she allows us a peak at the vulnerability hiding inside this woman. Steuer and Strum play Tracey and Cynthia with such fine nuance you feel like you are a voyeur to their lives. Both ladies are marvelous, I hope we see them again on Philly stages. Sweat is a funny, challenging and visceral play.”

“Tracey played with verve by Monica Steuer is the only psychologically vital character. The destruction of Tracey’s workplace destroys her. She moves jerkily about the stage never knowing who to hug or who to hit.” 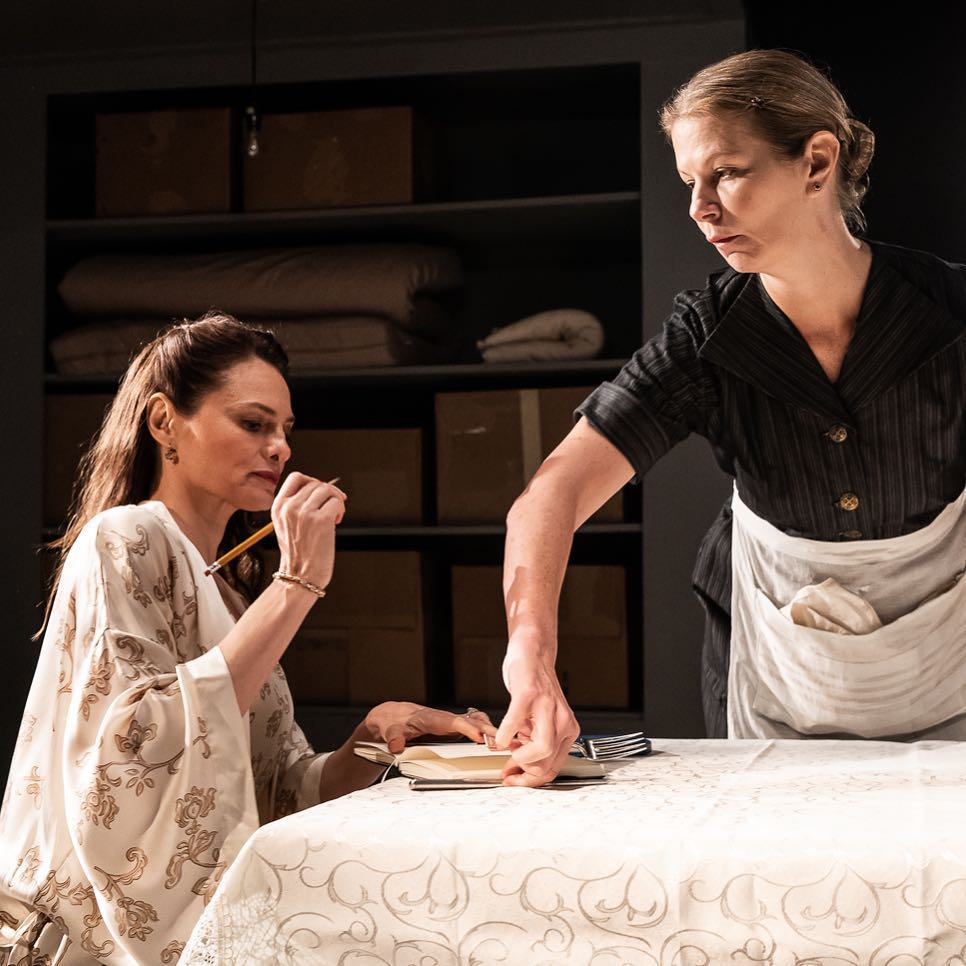 The Conduct of Life (THEATRE)

“Lisping, mugging and gliding about are the chief features of Monica Steuer’s hysterical characterization of Olimpia. It’s like watching Edna May Oliver appearing in a Pedro Almodóvar film. Ms. Steuer’s hilarious speech detailing the repetitive routine of her servitude, throwing silverware around and exhibiting despair during the bleak finale are standout moments of her terrific work.”

“As the maid, Monica Steuer has industrial strength charisma and 14-K acting chops.” 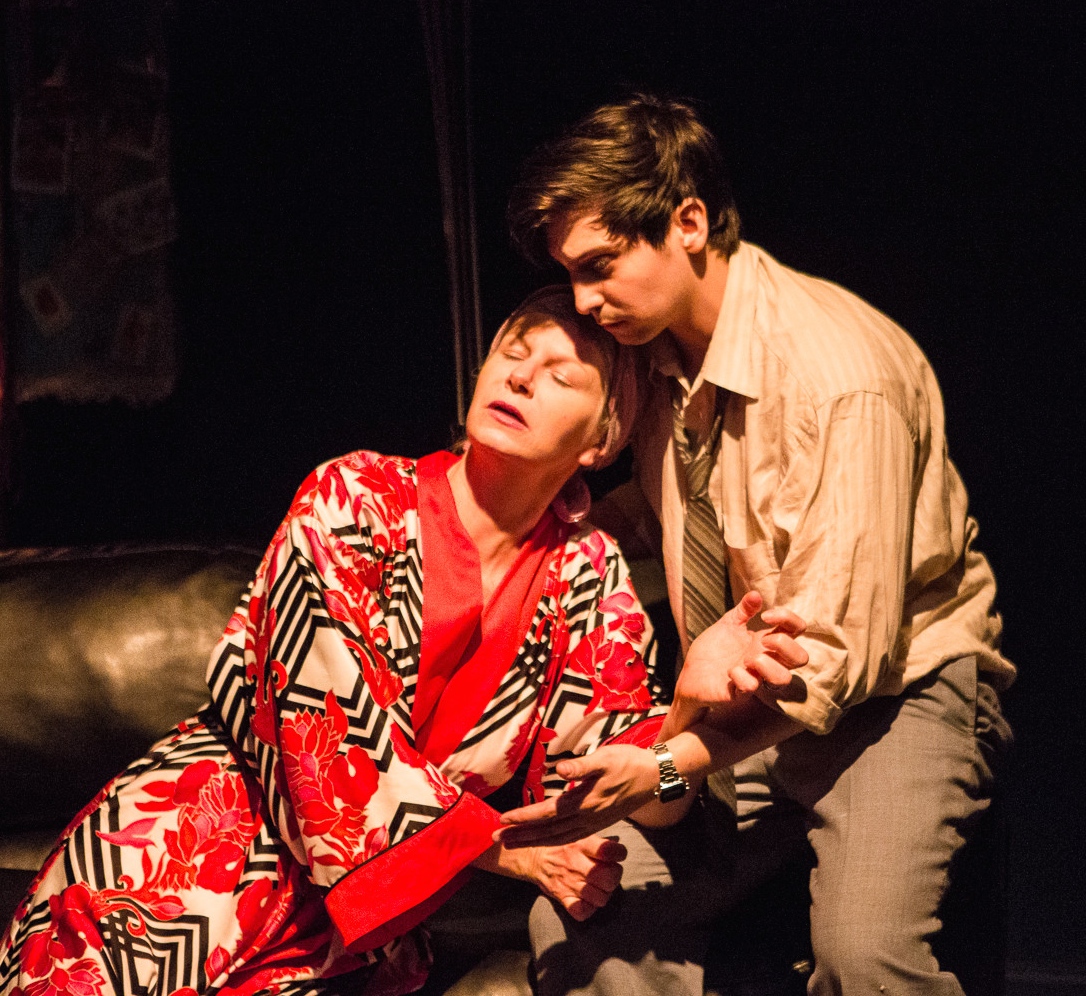 “…Much more seems like a distraction from the master class performance of Steuer, who is most captivating at her most fragile and loneliest.”

“Steuer as Elena delivers an epic performance of wild girl turned wise crone. She has a wide range of emotions to work through in the play, and she navigates the asks of the text with the dexterity of a seasoned pro. I particularly enjoyed her character’s story arc and how she colored in the outline with such majestic shades. Her life situation has caused the fallout and ripples of despair that knock all of the others off their feet so that they can wake up to themselves. A stunning performance!”

“Elena is by far the most fascinating character Octavio Solis has written in Prospect. She’s a fiery volcano of a woman. Monica Steuer brought the ferocity. Once she appeared, she dominated the stage.”

Michael Block – Theatre in the Now

“The entire cast in this production is terrific… Monica Steuer is particularly strong as Elena. Elena is dying of cancer, and Ms. Steuer incorporates this ingredient into the character on an elemental level. It informs her performance throughout. She gives a line as simple as “Some women, I swear to god!” and we hear in it the character’s entire life experience – and, incidentally, she makes us laugh with the line.” 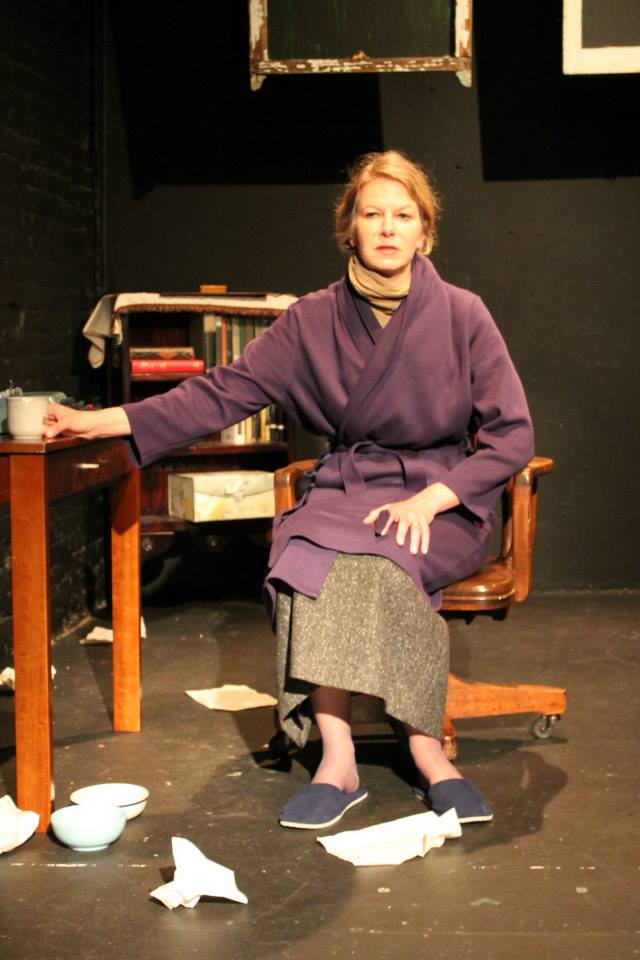 “… In MUSAS, Monica Steuer masterfully oscillates between manic joy and crushing despair in her monologues and interactions with Frida Kahlo.”

“… Monica Steuer not only bares an uncanny resemblance to Plath, but she also excels at shaping an otherwise one-dimensional character into a full-bodied tormented soul.”

“… Monica Steuer throws herself heart and soul into recreating Plath…”

“… The performances are excellent. The actors embrace the choices they make, character-wise, and present wholly believable people.”

House of the Spirits (THEATRE)

“Monica Steuer offers a mesmerizing, multi-layered and beautiful performance opposite of Landrieu as Clara, the seer and grandmother of Alba.”

“…Alba’s grandmother, Clara, memorably portrayed by Monica Steuer, in pigtails… Steuer’s free-spirited character effectively ages into a serene but clairvoyant sexpot. She’s one of several talented Gala newcomers who elevate House of the Spirits above the theater’s already professional standards.”

“Steuer does a particularly nice job taking Clara from a gleeful child in pigtails to an ethereal bride to a sadder, pragmatic matron.”

“Monica Steuer’s Clara moves with grace through the passages of Clara’s life, from a prophesizing young girl to coquettish ingenue to gentle matriarch and calming spirit.”

“… Jaime Camil and Monica Steuer, as their Mexican sidekicks, raised the comedy to a higher level.”

The Hollywood Reporter by Frank Scheck 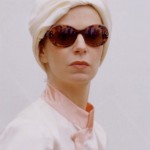 Destiny Has No Favorites (FILM)

“…Farceurs abound, led by the compellingly watchable Steuer, reveling in the role of a woman junking her dull everyday identity for an infinitely more exciting one…”

“Here we find two of the best performances of Peruvian cinema of all time: one of them is Monica Steuer as the lady and lead in the story. With aristocratic airs, the actress performs her role with total control of her craft, and it is she who can make us erupt in laughter with just uttering a word.” 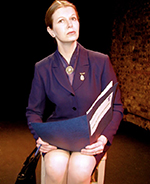 “Monica Steuer manages to capture June perfectly, finding an excellent balance between concern and self-righteousness. Her arguments are disturbing because she wisely plays June as realistically as possible.”

“Monica Steuer switches from her Mrs.Paradowski and June Handly characters to that of a Brazilian nun, and converses with the child in rapid-fire Portuguese. Monica Steuer, in real life a native Brazilian raised in Mexico, does an excellent job of handling three different roles here, segueing flawlessly from an Anglo-American nurse to a fundamentalist Christian to a Brazilian nun.”

“Monica Steuer is very convincing as June Handly, the anti-homosexual, Jesus – loving radio host whom David confronts on the air. In brilliant contrast, she also portrays a nun and Mrs.Paradowski, the Head of Pediatrics at a local Buffalo hospital.”

“Steuer, as Handly and several other characters, brings a sensitivity to the stage that always engages.” 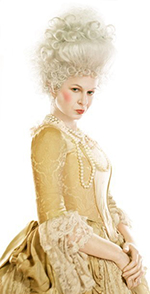 “…Monica Steuer is hilarious as the Marquise of Ahh!…”

“…The great surprise of the evening was Monica Steuer as the Marquise of Ahh! Her grace is demonstrated in her exceptional command of the stage.” 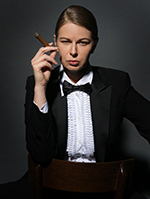 Scent of the Female (THEATRE)

“Monica Steuer was simply sensacional as the psychiatrist, confirming her reputation as one of the best actresses we have in this industry.

A Bust For Every Body (THEATRE)

“…Steuer in particular, milks laughs out of every line with impeccably timed double takes and Benny-esque pauses…”

“…but the one that saves the typical flaws of the literary rather than theatrical dialogue of this play by the Spaniard, Ernesto Caballero, is Woman 2, embodied by Monica Steuer, from Brazil, with just the right amount of theatrical vigor where great timing makes her stand out as an exquisite comedienne.” 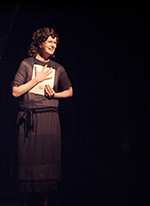 “Monica Steuer as the self-sacrificing mother, transmits her grief to the audience, showing her great skill as a dramatic actress.”

“…Applause for the actress Monica Steuer for her magnificent interpretation of Berthe Gardez, the mother of the great Carlos, who also surprised us as an excellent and moving singer.” 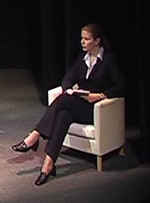 The Management Forgives a Moment of Madness (THEATRE)

“Monica Steuer conquers her character with the idiosyncrasy of charitable royalty that confuses and intoxicates for its sensuality. She is a nun dressed in formal office attire… Her psychological study goes beyond that of her character’s aura and she delivers a performance of a leading lady on Broadway.”

“… as for Monica Steuer, it suffices to say that she owned her character admirably, as it is expected from one of the best actresses in our industry.” 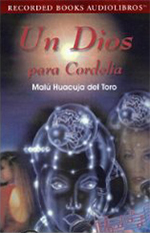 A God For Cordelia (AUDIOBOOK)

“…Rendered in a neutral Spanish, the narration by Monica Steuer is one of the best that Recorded Books has produced so far. It is lively and dramatic, highlighting dialog when necessary, and vividly portraying the stories of these women’s apocalyptic world through varied tones and a paced reading. The narration flows very well, keeping listeners engaged at all times.” 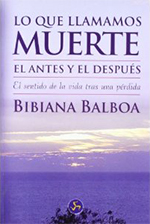 What We Call Death: The Before & After (AUDIOBOOK)

“… I would like you to thank Monica on my behalf. First tell her that she has a very sweet and beautiful voice. But above all thank her for knowing how to capture the spirit, the soul and the meaning of the book and for the particular way she interprets the spiritual and humane melody of the book. With her modulation, her emphasis, her intonation and with her feeling, she has been able to reflect the soul, the essence of the facts and of the message I had been trying to transmit throughout my writing. Not an easy task, since the subject matter of this book is very particular and it contains a lot of dialogue…”

Bibiana Balboa – author of the book(on an e-mail written to Manuel Herrera of Recorded Books, LLC )

” While we’re giving feedback, may I just say that I think Monica Steuer is outstanding. Wonderful vocal quality, great on character voices, rich interpretations of a wide variety of stories. She’s really great.”